PROPERTIES – ‘C’ Native Carbon. The same element also occurs naturally in the form of Graphite, another mineral with completely different characteristics and appearance. Diamond is rated 10 on Moh’s scale of hardness. It is estimated to be 10-150 times harder than Corundum, the only mineral with the hardness of 9 on Moh’s scale. The dencity of the Diamond is 3.52 g/cm3.

GENESIS – The most widely accepted theory is that it was formed at great depths in the Earth’s crust at very high pressures and temperatures. Explosive types of volcanic phenomenon would than have been responsible for driving it to the surface with such a rapid drop in temperature that it was impossible for the diamond to be transformed into the graphite, which is the carbon phase stable at low pressures. A Diamond is formed at great depths of 80 kms or more at 1100 to 1300 degree centigrade, later carried up by volcanic eruptions.

OCCURANCE – For many centuries, the only place where Diamonds were found was India. Early in the 18th century they were also mined in Brazil than in 2nd half of the 19th century they began to be mined in South Africa, which in turn became the chief world source. Since in the beginning of the 20th century Angola, Zaire, Ghana, Guyana, Ivory Coast, Tanzania and Soviet Union also have great deposits also with Guyana, Venezuela, Borneo, China(in the province of Hunan) also Australia. One fact has also to be considered that for obtaining 1 gm of Diamond, 20 tons of rocks have to be worked. About 2 million carats of cut Diamonds are issued in the market each year.

APPEARANCE – In most of the cases Diamonds are colorless or to be more precise ranges from perfectly colorless (infrequent) to yellow tinged or sometimes brownish. Diamonds with a definite color are extremely rare and quite valuable. It can be yellow, yellow brown, predominantly brown or very occasionally pink to reddish, blue, blue-gray, pale green or violet. Its luster or fire depending on reflection from both the inner and outer surfaces of the light incident on the table and crown is greater than that of other stones, due both of its high refractive index, which facilitates total internal reflection and its exceptional hardness enabling it to acquire a similar degree of polish. Each Diamond is a work of art and each is original. For like snowflakes or fingerprints, no two Diamonds in the world are exactly alike.

DISTINCTIVE FEATURES – Hardness can be an important factor in distinguishing Diamond from other stones. It is in fact the only stone capable of scratching Corundum. The modern imitation of Diamond like Cubic Zirconia is less hard than Corundum, so the two can be easily distinguished by comparing them with Corundum, although the results should be observed under a binocular microscope. Generally imitations or simulates are too heavy, as in the case of Cubic Zirconia, GGG(Gadolinium Gallium Garnet) but this rule does not get applicable on synthetic spinal, colorless topaz or colorless sapphire.

The influence of Carat (weight) – The Diamond of 1 carat is worth more than the one of .90 cents because it exceeds the conventional limit of the complete carat i.e. the price per carat increases by stages with each complete carat number.

The influence of Color– The vast majorities of Diamonds are colorless or with yellowish tinge. Perfectly clear stones however are comparatively rare and also valuable. For more precise on color, an internationally adopted color grade table is followed.

The influence of Clarity– Many Diamonds contains crystalline inclusions or discontinuities (even just fractures) which reduce their transparency by interpreting the path of the light rays. Stones free of inclusions or visible discontinuities are described as pure, and the value of the Diamond diminishes as visible imperfections increase.

The influence of Cut– With modern machines and technologies various cuts have been introduced which besides enhancing the luster and fire also enables to get maximum weight and very less wastage of the Diamond. The main types of faceted cuts are – round cut, oval cut, pear cut, marquise cut, rectangular cut, emerald cut, triangular cut, Ceylon cut, star cut, scissors cut, etc. Very specifically Belgium is very famous for accurate and marvelous cuts.

SIMULATANTS AND SYNTHETICS OF DIAMOND 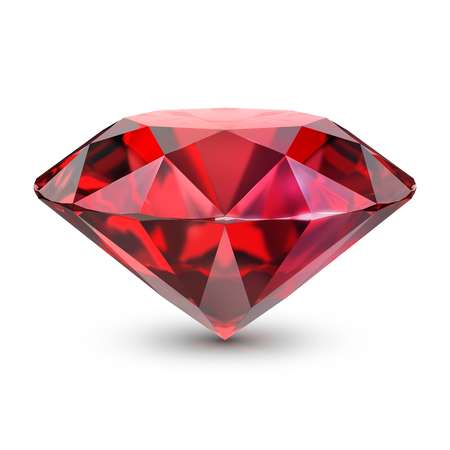 CORUNDUM/RUBY PROPERTIES – Aluminum oxide. It has a hardness of 9 which is highest after Diamond. The density is approx […]