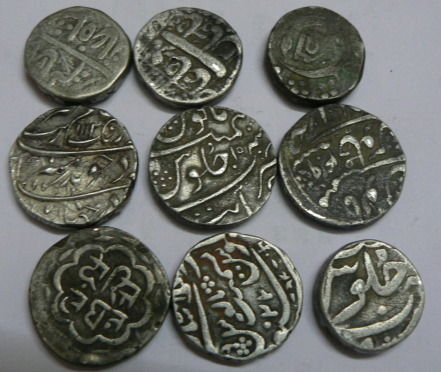 In the beginning of 16th century ‘Ibrahim Lodi’ belonging to the ‘Lodi Dynasty’ was defeated and slain in the war at Panipat by ‘Zahir ud din Muhammad Babur’ that was directly  descended from the two great Central Asian scourges –Timur, who was also known as  Tamburlaine, and Chengiz Khan, resulting in the origin of ‘Mughal Dynasty’ in India. ‘Babur’ had four sons naming ‘Nassir ud din Humayun’, ‘Kamran’, ‘Hindaal’ and ‘Mirza Asgari’. ‘Babur’s successor and his elder son ‘Nassir ud din Humayun’, was a very weak ruler and during his reign an Afghan naming ‘Sher Khan’ started increasing his dominance in Bengal and defeated ‘Humayun’ in the war at ‘Chausa’ and in order to save his life ‘Humayun’, jumped in to the river ‘Ganga’ and fortunately he was saved by a ‘Bhishti’ and in order to oblige him, ‘Humayun’ when reached ‘Agra’ made ‘Bhishti’ a king for one day and in order to commemorate, ‘Bhishti’ circulated the coins of leather bearing gold seal on them. Here it is necessary to bring in the kind knowledge that the mausoleum of that ‘Bhishti’, who was the king for one day, is situated in the compound of Civil Court of Agra opposite Nat raj Talkies by the name of ‘Chun Chun Katora’.

After being defeated in the war with ‘Sher Khan’ at ‘Chausa’, ‘Humayun’ regained his strength and again attacked ‘Sher Khan’ at ‘Kannauj’ but again was defeated and than he was forced to flee to ‘Iran’. With that the reign of ‘Afghans’ begun resulting in the origin of new dynasty ‘Suri Dynasty’. ‘Sher Khan’ renamed himself as ‘Farid ud din Sher Shah Suri’. Undoubtedly he was the master of administrative abilities and formulated many plans and policies for the welfare of people and built a long ‘Sher Shah Suri Marg’ or ‘Grand trunk Road’. After his demise, his younger son ‘Jalal ud din Islam Shah’ sat on the throne and the coins issued by him were of big flan and than ‘Mubariz ud din Muhammad Adil Shah’ sat on the throne but ‘Adil Shah’ was fond of living luxurious lifestyle full of whims and fancies which resulted in the revolts at many places and two new contenders for the throne originated naming ‘Ibrahim Suri’ and ‘Sikandar Suri’, this chaos for the throne helped ‘Humayun’ to make his comeback to ‘India’ and again by defeating ‘Sikandar Suri’, ‘Humayun’ sat back on the throne.

But unfortunately it was not in the luck of ‘Humayun’ to be a ruler for long time and only six months later he died accidently by slipping and falling from his library steps on hearing the call to prayer. ‘Humayun’ had two sons naming ‘Akbar’ and ‘Mirza Hakim’.

After the demise of ‘Humayun’, his son ‘Akbar’ sat as ‘Jalal ud din Muhammad Akbar’ on the throne and with that ‘Mughal Dynasty’ again got re-established and ended with Last Mughal Emperor ‘Bahadur Shah Jafar’  in the 19th century.

‘Akbar’ proved himself as a perfect ruler and with his capability he subsided all his rebels and strengthened the foundation of ‘Mughal’ empire in India. He got builded the ‘Agra fort ‘by acquiring the fort of ‘Badal Garh’ and the royal city of ‘Fatehpur Sikri’. The coins issued by ‘Akbar’ were in copper, silver and gold. Initially the coins of ‘Akbar’ were same in look like that of ‘Suries’ and later he circulated the coins in square shape. Few gold coins of ‘Akbar’ are in ‘Mehrabi’ shape also. He also circulated the coins of ‘Ram Siya’ as a symbol of his liberal attitude towards other religions. He ruled for approximately fifty years and was also the founder of the sect ‘Din-I Ilahi’ and also had a panel of experts in his court specializing in there own fields and were called ‘Navratans’. ‘Akbar had three sons naming as ‘Salim’, ‘Murad’, and ‘Daniyal’. In which ‘Murad’, and ‘Daniyal’ expired during the life scale of ‘Akbar’ due to there profuse habit of having alcohol.

During the last decade of ‘Akbar’s reign, his son ‘Salim’ rebelled against him and issued his own coins but with the efforts of well-wishers the differences between the father and son subsided and later after the demise of ‘Akbar’, ‘Salim’ sat on the throne with the title of ‘Nur ud din Muhammad Jahangir. ‘Jahangir’ was famous for his justice; he got a big bell hung at the gate of ‘Agra fort’ so that people can ring it at any time to get justice. The coins circulated by ‘Jahangir’ are in a class themselves with a very clear script and perfection. His coins were ornamental in décor and he issued coins of vast variety like the coins bearing his portrait with different poses, coins of Zodiacal signs, 20 to 50% and more over weighted coins and many other types. He built the famous gardens at ‘Kashmir’. He also commented that “if there is Heaven on Earth, than it is here at Kashmir”. In the later period of his reign, due to his addiction for opium and alcohol he got weakened mentally and physically and the throne was now governed by his wife ‘Mehrunissa’ alias ‘Nur jahan’ and the name of ‘Nur jahan’ was now also depicted by the authority of ‘Jahangir’ on the coins which continued till the demise of ‘Jahangir’. Interestingly ‘Mehrunissa’ was the wife of ‘Sher ah Afghan’ and had daughter naming ‘Ladali Begum’ with him, but ‘Jahangir’ by conspiracy got murdered ‘Sher ah Afghan’ and married ‘Mehrunissa’ and renamed her as ‘Nur jahan’. She later built the beautiful ‘Ad Maud Daula’ in ‘Agra’ in the loving memory of her father. ‘Jahangir’ ruled for approximately twenty five years and had four sons naming ‘Khusru’, ‘Khurram’, ‘Parvez’ and ‘Shahriyaar’. ‘Khusru’ was been murdered on the conspiracy of ‘Khurram’ during the life time of ‘Jahangir’ and ‘Parvez’ died due to his profuse habit of drinking. That why after the demise of ‘Jahangir’ only his two sons were there i.e. ‘Khurram’ and ‘Shahriyaar’. ‘Nur Jahan’ was very assured of ‘Shahriyaar’ to be the contender for throne so she married her daughter ‘Ladali Begum’ with him.

‘Jahangir’, died at ‘Lahore’ and at that time ‘Khurram’ was in south, so the son of ‘Khusru’ naming ‘Dawar Bakhsh’ sat on the throne and issued coins from Lahore. On the other side ‘Aasaf Khan’, father in law of ‘Khurram’ and also the brother of ‘Nur Jahan’ defeated ‘Shahriyaar’ in the war near ‘Lahore’ and turned him blind. Here when ‘Khurram’ reached ‘Agra’ he with hidden conspiracy killed all male members belonging to the ‘Mughal’ blood and sat on the throne by the name ‘Shihab ud din Muhammad Shahjahan’. During his reign he issued coins bearing ‘Kalama’ on one side and his name and title on other side. He ruled for approximately thirty years. He had 6 daughters and 8 sons’ i.e. total 14 children with his wife ‘Arjuman Banu’, alias ‘Mumtaj Mahal’ who was also the niece of ‘Nur Jahan’, the children names were- 1.Princesses ‘Harulnissa’, 2. Princesses ‘Jahanara’, 3.Prince ‘Dara Shikoh’, 4.Prince ‘Shah Shuja’, 5.Princesses ‘Roshanara’, 6.Prince ‘Aurangzeb 7.Prince ‘Umed Baksh’, 8.Princesses ‘Suraiya Banu’, 9.Son-died at birth’, 10.Prince ‘Murad Baksh’, 11.Prince ‘Lut uf Ulla’, 12. Prince ‘Daulat Afjan’, 13.Daughter-died at birth’, 14.Princesses ‘Mauharara’, in which later only 4 sons naming ‘Dara Shikoh’, ‘Shah Shuja’, ‘Aurangzeb’ and ‘Murad Bakhsh’, and 2 daughters ‘Jahanara and ‘Roshanara’ survived. The princesses ‘Jahanara‘built the great mosque naming ‘Jama Mazid’ in ‘Agra’.

‘Shah Jahan’ was in very much in love with his wife ‘Mumtaj Mahal’ and built the beautiful mausoleum naming ‘Taj Mahal’ at the banks of river ‘Yamuna’ in ‘Agra’ in her sweet memory and after his death was also buried there. Shah Jahan also built the Red Fort of Delhi and got the celebrated ‘Peacock Throne’ built for him as a means of displaying the immense wealth of jewels in the royal treasury. During the illness of ‘Shah Jahan’, the fight for succession of the throne started between his sons and ‘Shah Shuja’ from ‘Bengal’ and ‘Murad Bakhsh’ from ‘Gujarat’ issued coins in their name but ‘Aurangzeb’ won between them and by following the footsteps of his father he brutally got killed his brothers and made his father ‘Shah Jahan’ prisoner for rest of his life in the ‘Agra Fort’ and ‘Shah Jahan’ lastly died there as a prisoner and was cared by his daughter ‘Jahanara‘ in last days.

After prisoning his father ‘Shah Jahan’, ‘Aurangzeb’ set on the throne by the title of ‘Muhayyi ud din Muhammad Aurangzeb Alamgir’. ‘Aurangzeb’ was ruthless and fanatic in nature for his religion and stopped depicting ‘Kalama’ on the coins as he had the thought that these ‘Holy’ words get impurify  as the coins come in the hands of non Muslims. For his living he uses to copy holy ‘Qur’an’ and sew the caps which are worn during ‘Namaz’. ‘Aurangzeb’ reigned for about fifty years. 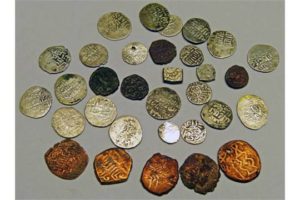 Coins- The important finding of the ‘Human Civilization’-Part 4 (India)

Sultanate Period   In 11th century during the reign of Raj put kings, the period of Muslim rulers came in […]

Coins- The important finding of the ‘Human Civilization’-Part 6 (India)

British Period As the strength of Mughal started weakening, it powered many regional kings and princely states like ‘Marathas’, […]